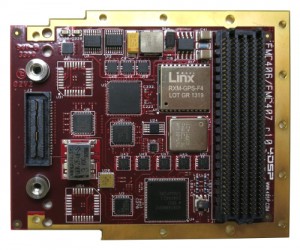 The FMC406 is a low-noise clock generation and distribution module with eight clock outputs and eight trigger outputs that are fully synchronized. This module can either distribute an externally supplied clock or a locally generated clock. In the standard configuration, the FMC406 can generate any clock frequency between 34.375 MHz and 250MHz and lock it to an internal or external reference. The maximum clock frequency can be extended to 350MHz as a build option.

A synchronous trigger signal received from the FMC connector is distributed to the eight trigger outputs. Additionally, an external trigger signal can be synchronized to the output clocks and distributed on the eight trigger outputs. Alternatively, it is also possible to distribute the external 1PPS or locally generated 1PPS signal for data time stamping. The FMC406 is recommended for applications that require synchronous A/D or D/A sampling across multiple cards or systems. With a low-pin count connector and front panel I/O, this module can be used in a conduction-cooled environment. 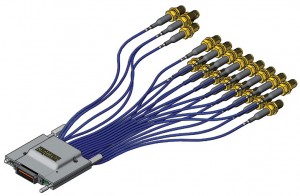 The design is based on Analog Devices’ ADF4351 PLL synthesizer in combination with the Cypress Semiconductor CY29948AXI LVCMOS fan-out buffer. The fan-out buffer outputs eight phase-aligned, low-noise clocks generated from either the external or internal clocks. A GPS module, the LINX RXM-GPS-F4-T, provides the 1PPS signal for clock and trigger synchronization. The FMC406 daughter card is mechanically and electrically compliant with the FMC standard (ANSI/VITA 57.1).

This website uses cookies to improve your experience while you navigate through the website. Out of these, the cookies that are categorized as necessary are stored on your browser as they are essential for the working of basic functionalities of the website. We also use third-party cookies that help us analyze and understand how you use this website. These cookies will be stored in your browser only with your consent. You also have the option to opt-out of these cookies. But opting out of some of these cookies may affect your browsing experience.
Necessary Always Enabled
Necessary cookies are absolutely essential for the website to function properly. This category only includes cookies that ensures basic functionalities and security features of the website. These cookies do not store any personal information.
Non-necessary
Any cookies that may not be particularly necessary for the website to function and is used specifically to collect user personal data via analytics, ads, other embedded contents are termed as non-necessary cookies. It is mandatory to procure user consent prior to running these cookies on your website.
SAVE & ACCEPT